Latest News
Home /Battle of the billionaires brewing? Trump could meet his match in 2020 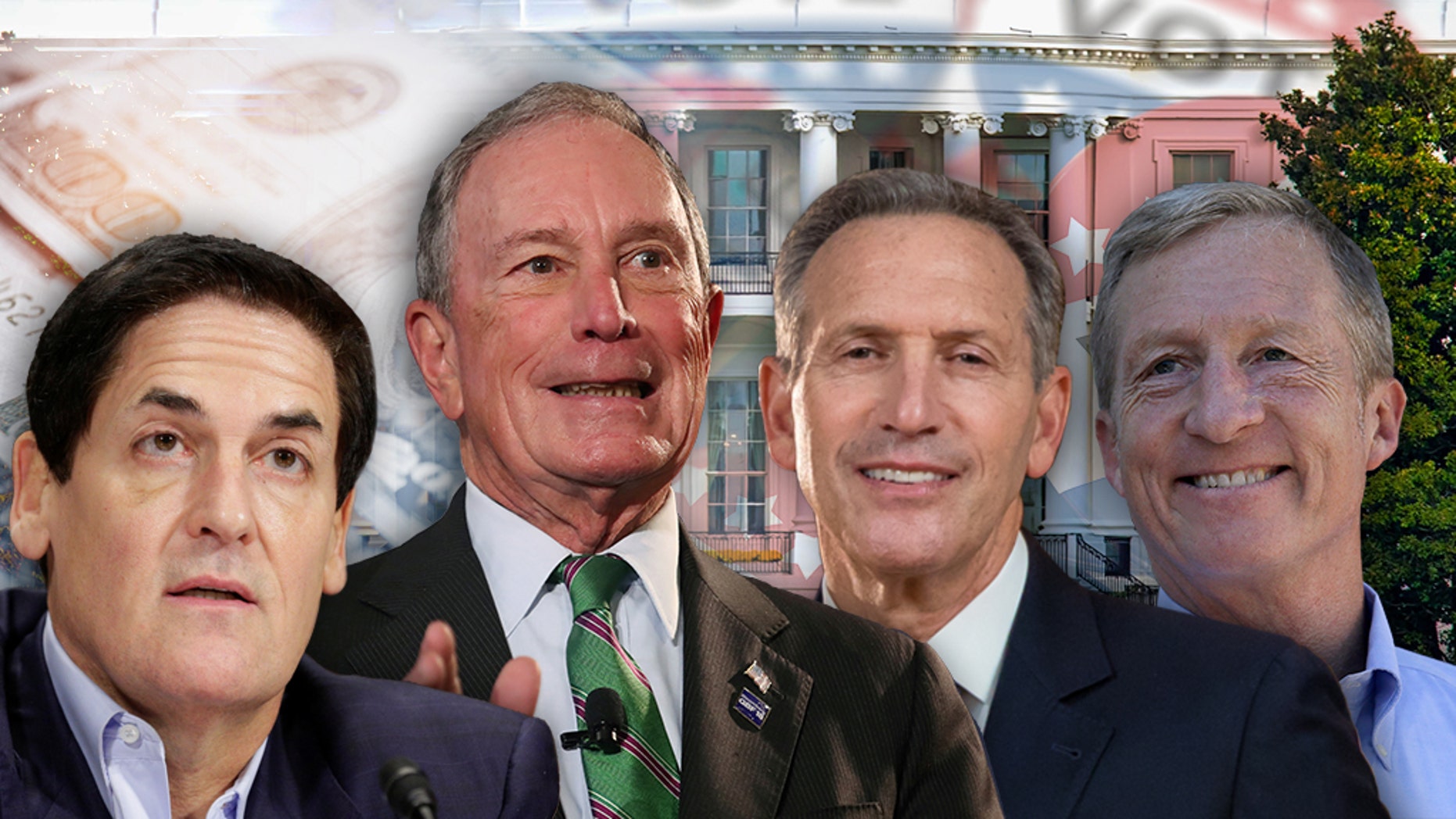 Donald Trump is the richest president in U.S. history – but as he gears up for a re-election campaign, the real estate magnate could end up facing off against someone even wealthier.

The budding 2020 field of potential challengers includes no fewer than four fellow billionaires.

The wealthiest of the pack, by far, is former New York City Mayor Michael Bloomberg. The media mogul and gun control advocate’s net worth is estimated at nearly $52 billion, according to the latest Forbes 400 Richest Americans list.

That dwarfs Trump, whose wealth is estimated by Forbes at $3.1 billion (though Trump has claimed his net worth is higher). Bloomberg may be the best-known of the billionaires eyeing a bid – and the most likely to take the plunge, given recent trips to early-voting states and a public switch back to the Democratic Party after years as an independent – but several others have stirred speculation.

It’s unclear if any of them would decide to run. While Cuban reportedly is flirting with a White House bid as a Republican or independent, the other three would be entering a sprawling Democratic field that includes high-profile senators and several former presidential candidates.

At least on the Democratic side, their immense wealth could amount to a double-edged sword.

Like Trump, they would have the ability to self-finance – which would help not only flood the airwaves with commercials but assert their political independence from special interests. Trump wouldn’t be the only one who could claim he’s not for sale with donors.

“What it can do is keep you in the race a lot longer than somebody who’s not able to raise money and it obviously allows you to get your message out, whatever that is,” Adrienne Elrod, a Democratic strategist who served as senior aide on Hillary Clinton’s 2016 presidential campaign.

At the same time, their wealth could become a liability, running for the nomination in a party where all the energy is with the progressive wing.

“I think it’s an uphill battle for a billionaire in the Democratic Party in a way that is distinct from the Republican Party,” said Neil Sroka, communications director for the progressive group Democracy for America. “It’s not necessarily going to hurt them, but it’s definitely not going to help them.”

Sroka noted the “income inequality” issue will be front and center in the Democratic primary.

“It’s not as if it’s a cross to bear, but it’s something that they’re going to have to talk about and be forthright with throughout the primary process,” he said.

For now, Bloomberg is attracting the most attention among the billionaires. He took a highly visible swipe at the president over the weekend, with a blistering column for his media company decrying Trump’s “recklessly emotional and senselessly chaotic approach to the job.”

A former Republican turned independent who returned to the Democratic Party this year, Bloomberg made stops in the early caucus and primary voting states of Iowa and New Hampshire this past fall, fueling speculation he’s gearing up for a White House run.

“He’s done a lot of good in his post-mayoral life with his wealth and he’s espoused a lot of progressive values as part of that,” Elrod said of Bloomberg’s efforts to battle gun violence and his vow to make climate change the defining issue in 2020.

But she added that “the biggest thing that’s going to hurt him more than his personal wealth is the fact that he used to be a Republican.” She said that would be a “far bigger liability” competing in “a very left-leaning progressive grassroots primary.”

Steyer, meanwhile, has attracted attention spending millions on a campaign to impeach the president. The former hedge fund manager – who’s said he’ll decide on a White House run early in the new year – kicked off a town hall tour this month in South Carolina, the first southern state to vote in the primary and caucus calendar. That tour will also bring him to New Hampshire, Iowa and Nevada, other early-voting states.

Steyer has also built up a vast email distribution list through his “Need to impeach” drive and NextGenAmerica, the grassroots advocacy organization he created five years ago.

“When you think of Tom Steyer, the first thing Democratic voters think of is he’s for impeachment, which is not a bad thing, because he’s able to get his message out and break through,” Elrod said.

But she questioned whether the impeachment push would actually translate to primary votes.

Schultz, who suffers from a lack of name recognition compared with some of the other uber-wealthy potential candidates, has hired a major public relations team and is expected to crisscross the country early in 2019 as he promotes a new book.

For any of these businessmen who enter politics, strategists say the message will matter more than the money.

“You can bring a lot of big money in, but we just saw in some of our recent elections here that that doesn’t mean at the end of the day that you’re going to be the one with your name on the ballot,” Zandra Rice-Hawkins, executive director of the New Hampshire-based progressive group Granite State Progress, said.

Ultimately, a hurdle for these candidates may be whether any of them can represent change in a party torn between the old and new guard, after rallying behind Clinton in 2016 only to see the establishment choice narrowly lose to Trump.

“I don’t know that the Democrats are necessarily interested in a candidate like [the billionaires] rather than somebody who is younger or who speaks to questions of diversity or who is going to run a much more unabashedly liberal or progressive campaign,” Saint Anselm College politics professor Christopher Galdieri said.