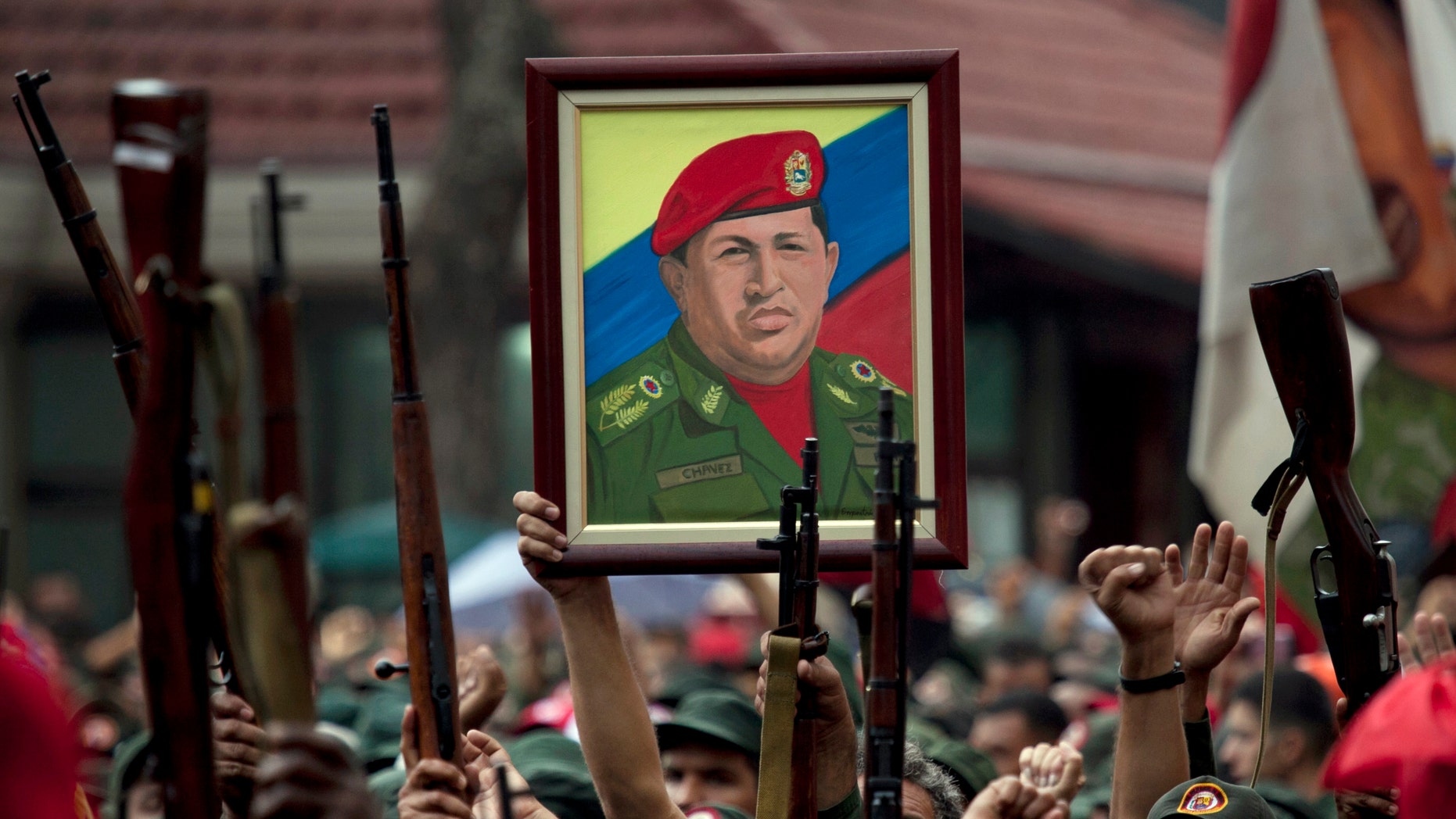 In this April 13, 2010 file photo, members of the National Revolutionary Militia hold up their weapons and a painting of Venezuela’s President Hugo Chavez at an event marking the 9th anniversary of Chavez’s return to power after a failed 2002 coup, in Caracas, Venezuela. (AP Photo/Ariana Cubillos, File)

CUCUTA, Venezuela/Colombia border – As Venezuela continues to crumble under the socialist dictatorship of President Nicolas Maduro, some are expressing words of warning – and resentment – against a six-year-old gun control bill that stripped citizens of their weapons.

“Guns would have served as a vital pillar to remaining a free people, or at least able to put up a fight,” Javier Vanegas, 28, a Venezuelan teacher of English now exiled in Ecuador, told Fox News. “The government security forces, at the beginning of this debacle, knew they had no real opposition to their force. Once things were this bad, it was a clear declaration of war against an unarmed population.”

Under the direction of then-President Hugo Chavez, the Venezuelan National Assembly in 2012 enacted the “Control of Arms, Munitions and Disarmament Law,” with the explicit aim to “disarm all citizens.” The law took effect in 2013, with only minimal pushback from some pro-democracy opposition figures, banned the legal commercial sale of guns and munitions to all – except government entities.

Chavez initially ran a months-long amnesty program encouraging Venezuelans to trade their arms for electrical goods. That year, there were only 37 recorded voluntary gun surrenders, while the majority of seizures – more than 12,500 – were by force.

In 2014, with Nicolás Maduro at the helm following Chavez’s death but carrying through his socialist “Chavista” policies, the government invested more than $47 million enforcing the gun ban – which has since included grandiose displays of public weapons demolitions in the town square.

A former gun store owner inside Venezuela – who told Fox News he has now been relegated to only selling fishing supplies since the ban – said he can’t sell any type of weaponry – even a slingshot – and underscored that even BB ammunition and airsoft guns are only issued to police and military officers.

The punishment for illicit carrying or selling a weapon now is 20 years behind bars. Prior to the 2012 reform, there were only around eight gun stores in the entire country. And the process of obtaining a legal permit to own and carry was plagued by long wait lines, high costs and bribery “to make the process swifter” at the one department allowed to issue licenses, which operated under the umbrella of the Ministry of Defense.

“Venezuelans didn’t care enough about it. The idea of having the means to protect your home was seen as only needed out in the fields. People never would have believed they needed to defend themselves against the government,” Vanegas explained. “Venezuelans evolved to always hope that our government would be non-tyrannical, non-violator of human rights, and would always have a good enough control of criminality.”

He said it didn’t take long for such a wide-eyed public perception to fall apart. “If guns had been a stronger part of our culture, if there had been a sense of duty for one to protect their individual rights, and as a show of force against a government power – and had legal carry been a common thing – it would have made a huge difference,” he lamented.

Since April 2017, almost 200 pro-democracy protesters in Venezuela – armed mostly with stones – were shot dead by government forces in brutal retaliation to their call to end the oppressive socialist regime. The once oil-wealthy nation has continued its downward spiral into financial ruin, extreme violence, and mass human rights violations. An estimated three million Venezuelans have been forced to flee since 2015.

“Venezuela shows the deadly peril when citizens are deprived of the means of resisting the depredations of a criminal government,” said David Kopel, a policy analyst, and research director at the Independence Institute and adjunct professor of Advanced Constitutional Law at Denver University. “The Venezuelan rulers – like their Cuban masters – apparently viewed citizen possession of arms as a potential danger to a permanent communist monopoly of power.” 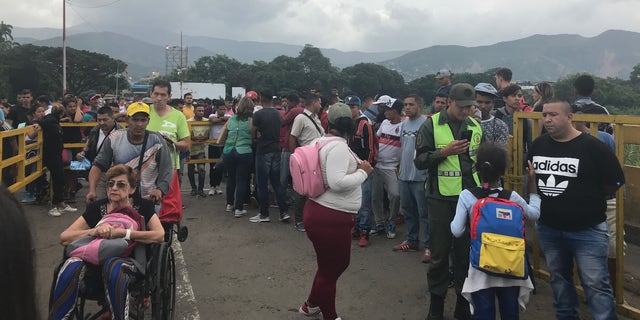 More than three million Venzuelans have fled into neighboring Colombia since the crisis of 2015.

Although the bill was sold to the population as a hardline effort to improve security, and sharply reduce crime, many now point to Venezuela as a case study for how gun prohibition can actually produce the opposite effect.

IN VENEZUELAN CRISIS, FAMILIES CAN’T EVEN AFFORD TO PROPERLY BURY THE DEAD

The violent crime rate, already high, soared. Almost 28,000 people were murdered in 2015 – with the homicide rate becoming the world’s highest. Compare that, according to GunPolicy.org – an international firearms prevention and policy research initiative – to just under 10,000 in 2012, and 6,500 thousand in 2001, the year before Chavez came to power.

The total number of gun deaths in 2013 was estimated to 14,622, having steadily risen from 10,913 in 2002. While comprehensive data now goes unrecorded by the government, in September this year, Amnesty International declared Venezuela had a murder rate “worse than some war zones” – 89 people per 100,000 people – and three times that of its volatile neighbor Brazil.

Much of the crime has been attributed by analysts to government-backed gangs – referred to in Spanish as “collectivos” – who were deliberately put in place by the government.

“They were set up by the government to act as proxies and exert community control. They’re the guys on the motorcycles in the poor neighborhoods, who killed any protesters,” said Vanessa Neumann, the Venezuelan-American president and founder of Asymmetrica, a Washington, D.C.-based political risk research and consulting firm. “The gun reform policy of the government was about social control. As the citizenry got more desperate and hungry and angry with the political situation, they did not want them to be able to defend themselves. It was not about security; it was about a monopoly on violence and social control.”

So while Venezuelan citizens were stripped of their legal recourse to bear arms, the “collectivos” – established by Chavez when came to power – were legally locked and loaded. Deemed crucial to the survival of the socialist dictatorship, the “collectivos” function to brutally subjugate opposition groups, while saving some face as they aren’t officially government forces, critics contend.

Eduardo Espinel, 35, who serves as a representative for the rapidly growing Venezuelan population in the Colombian border town of Cucuta – having fled his ailing nation two years ago under the threat of being kidnapped by local gangsters – said the law had proliferated the violence by allowing the collectivos to freely and legally shoot and kill.

“Everyone else but the common citizen. This law asks for the disarming of the common people, but everyone else can carry,” Espinel said. “The kind of law might make sense in a normal country, but in Venezuela, it makes no sense. People are faced with crime and have no easy means to defend themselves.” 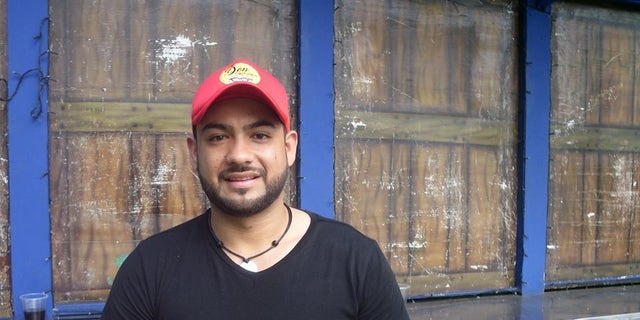 Eduardo Espinel, 35, who serves as a representative for the rapidly growing Venezuelan population in the Colombian border town of Cucuta, said a gun bam law had actually proliferated the violence in Venezuela.
(Fox News/Hollie McKay)

And Maribel Arias, 35, who was once a law and political science student at the University of Los Andes in her home state of Mérida but fled to the Colombian border with her family two years ago – living mostly on the streets as she and her husband take turns finding odd jobs such as selling water and attending bathrooms and while sharing the parenting duties of tending to their four children – bemoaned that they simply cannot rely on the nation’s law enforcement.

“The people of Venezuela should have rights for gun carrying because there is just too much crime and people should have the right to defend themselves because the justice system is not working,” Arias asserted. “If you call the police, the police come only if they want. If they capture the criminal maybe they will take away whatever they stole, but they normally go free again. It’s a vicious cycle.” 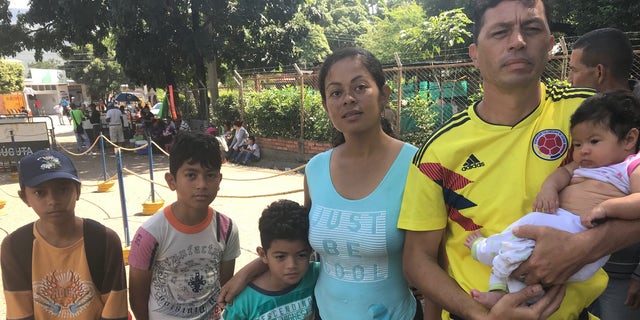 Maribel Arias, 35, who fled to the Colombian border with her family two years ago – living mostly on the streets as she and her husband take turns finding odd jobs while sharing the parenting duties for their four children – said Venezuelans cannot rely on the nation’s law enforcement.

Many contend the gun ban has in some ways hurt police and law enforcement, who have themselves become a more fervent target of street gangs. There was a 14 percent increase in police murders in 2016. And more than 80 percent of assailants subsequently stole the officer’s gun, according to Insight Crime.

Some experts contend many of the weapons and ammunition used by gangsters were once in the hands of government forces, and obtained either through theft or purchase from corrupt individuals.

And adding to the complication, the ranks of the police force are beleaguered by crime and corruption. “Crimes are committed by police, a lot of the criminals are police themselves,” said Saul Moros, 59, from the Venezuelan city of Valencia.

Luis Farias, 48, from Margarita, said that gun violence was indeed bad when guns were freely available for purchase. But it became much worse after the gun ban was passed. “Now the criminal mother is unleashed,” Farias said. “Trying to ban guns didn’t take guns off the streets. Nobody cares about the law; the criminals don’t care about the law.” 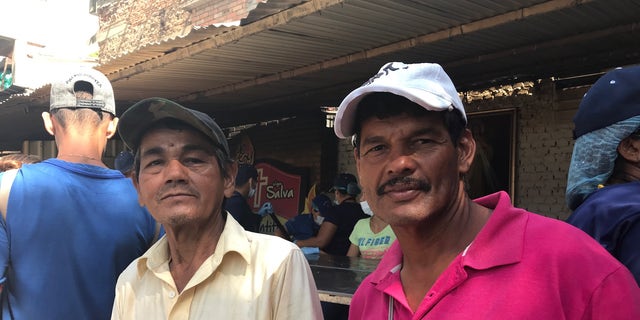 “Crimes are committed by police, a lot of the criminals are police themselves,” Saul Moros, 59, from the Venezuelan city of Valencia. (left) Luis Farias, 48, said gun violence was bad when guns were freely available – but became much worse after the so-called prohibition.
(Fox News/Hollie McKay)

A black market in weapons is also thriving. There are an estimated six million unregistered firearms circulating in Venezuela, but they remain far from reach for the average, non-criminal Venezuelan.

Prices vary daily. But an AR-15 rifle goes for around $500, sources said, while handguns sell for about $250. Those prices are far beyond the reach of the average Venezuelan.

“Most guns can be bought illegally in a sort of pyramid structure. A big irregular group or criminal organization has the best access to weapons directly from the government, and they sometimes even get access to basically new unused weaponry,” explained Vanegas. “The longer down the pyramid you are, you must get your weapon from the nearest big irregular group that overpowers you within your territory. This is not an option for any moral person, due to the fact that you need to deal with criminals in order to get an illegal gun. And for many obvious reasons, people will not even consider this.”

The Venezuelan government denies it is in a deeply deteriorating crisis, caused by its own policies. Rather, it blames the United States and opposition leaders for waging an “economic war.” 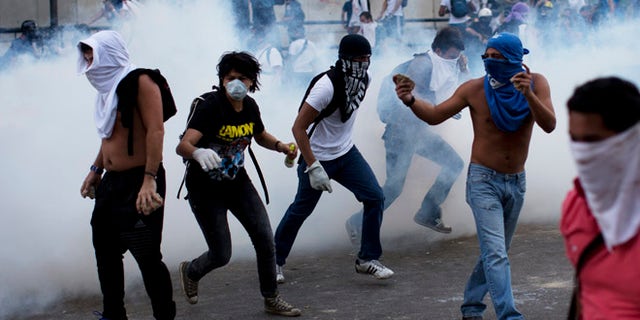 According to Omar Adolfo Zares Sanchez, 48, a lawyer, politician, and former mayor of Campo Elías municipality in the Venezuelan state of Mérida, it is now all but too late to make guns legally accessible to the average person.

“Without a doubt, if there had been a balance of armed defense we could have stood up and stopped the oppression at the beginning,” he contended. “But there is too much anarchy on the streets now. Making guns easier for anybody to buy now would start a civil war.”

Other Venezuelans argue that while violence has indeed rapidly increased in the years since the gun ban, it might have been that much worse as the economy collapsed, and the country deteriorated.  “The problem from the beginning and still now is that there are too many people in Venezuela who are lawless. Crime is a way of living,” said Emberly Quiroz, 25, mother of three. “Access to weapons won’t solve the problem.”