Adult-film actress Stormy Daniels claimed Wednesday that her attorney, Michael Avenatti, sued President Trump for defamation without her approval and launched a second fundraising campaign to raise money “without my permission or even my knowledge … and attributing words to me that I never wrote or said.”

In a statement to The Daily Beast, Daniels said that “Avenatti has been a great advocate in many ways,” but she added: “in other ways Michael has not treated me with the respect and deference an attorney should show to a client.”

“For months I’ve asked Michael Avenatti to give me accounting information about the fund my supporters so generously donated to for my safety and legal defense,” Daniels said. “He has repeatedly ignored those requests. Days ago I demanded again, repeatedly, that he tell me how the money was being spent and how much was left.

“Instead of answering me … Michael launched another crowdfunding campaign to raise money on my behalf. I learned about it on Twitter,” added Daniels, who also said that she had not yet decided if Avenatti would continue to represent her.

Avenatti responded with a statement obtained by Fox News: ” I am and have always been Stormy’s biggest champion.  I have personally sacrificed an enormous amount of money, time and energy toward assisting her because I believe in her. I have always been an open book with Stormy as to all aspects of her cases and she knows that.  You need only look back at her numerous prior interviews where she states we talk and communicate multiple times every day about her cases.

“The retention agreement Stormy signed back in February provided that she would pay me $100.00 and that any and all other monies raised via a legal fund would go toward my legal fees and costs,” Avenatti went on. “Instead, the vast majority of the money raised has gone toward her security expenses and similar other expenses. The most recent campaign was simply a refresh of the prior campaign, designed to help defray some of Stormy’s expenses.”

The fundraising appeal on the website CrowdJustice had raised $4,785 as of Wednesday evening. The Daily Beast reported that an earlier fundraiser netted more than $580,000 for Daniels’ expenses earlier this year. 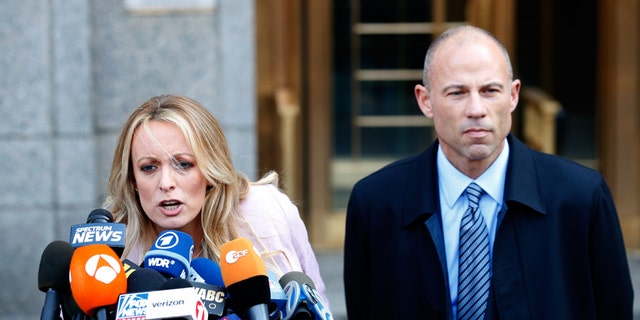 Last month, a federal judge in Los Angeles threw out Daniels’ defamation suit against the president, which arose from an April tweet in which Trump denied her claims of being threatened by a man in a Las Vegas parking lot in 2011. Daniels, whose real name is Stephanie Clifford, claimed Daniels said the man was threatening her for going public about an alleged sexual encounter with Trump in 2006. Trump has repeatedly denied the affair took place.

As part of his ruling in the defamation suit, U.S. District Judge S. James Otero ordered Daniels to pay Trump’s legal fees, which the president’s attorneys estimated to be $350,000.

Daniels initially sued Trump to invalidate the confidentiality agreement she signed days before the 2016 presidential election that prevented her from discussing a sexual encounter she said she had with Trump years before he ran for president. The confidentiality agreement included a payment of $130,000 to Daniels from Trump’s then-personal attorney Michael Cohen. This past August, Cohen admitted to making payments to Daniels and another woman, Karen McDougal “at the direction” of then-candidate Trump in violation of federal campaign finance law.