At a Monday night roundtable in Mississippi on his bipartisan criminal justice reform effort, President Trump charged that some migrants he identified as “grabbers” who rushed the San Ysidro, Calif., point of entry on Sunday essentially used children as human shields at the border.

“We’ve had some very violent people, and we don’t want, frankly, those people in our society,” Trump said at the Biloxi event, which included Mississippi law enforcement officials and South Carolina Republican Sen. Lindsey Graham. “We don’t want those people in our country. Three Border Patrol people yesterday were very badly hurt, getting hit with rocks and stones.”

The president turned to the widely circulated images from Sunday’s episode, which showed some migrants running away with children as tear gas canisters landed nearby. Videos and images from the port of entry also showed migrants throwing what appeared to be rocks over the fence and attempting to breach the wall.

“I do say — why are they there? First of all, the tear gas is a very minor form of the tear gas itself — it’s very safe, the ones that were suffering to a certain extent were the people that were putting it out there. But you really say, why is a parent running up into an area where they know the tear gas is forming, and it’s going to be formed, and they’re running up with a child?”

McAleenan said Monday that at least 69 people were detained after they crossed the border on Sunday, and that he was not aware of any that managed to cross and evade capture by U.S. authorities.

Trump continued: “In some cases, you know, they’re not the parents. These are people, they call ’em ‘grabbers’ — they grab the child, because they think they’re gonna have a certain status by having a child. You know, you have certain advantages and things with our crazy laws that frankly Congress should be changing. You know, if you change the laws, you wouldn’t have this problem.” 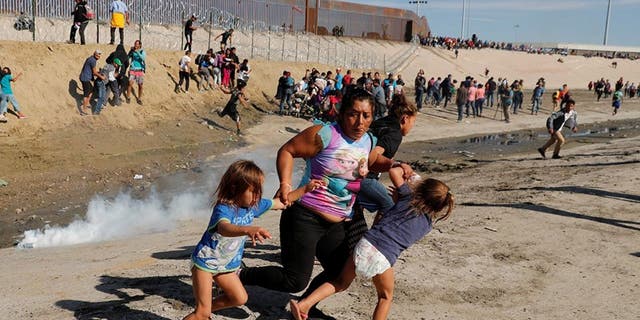 A migrant family, part of a caravan of thousands traveling from Central America en route to the United States, running away from tear gas in front of the border wall between the U.S and Mexico in Tijuana on Sunday.
(REUTERS)

That was an apparent reference to Trump’s longstanding criticism of the Flores consent decree, made amid litigation during former President Bill Clinton’s administration, that ostensibly limits the amount of time that federal authorities can detain illegal immigrant minors who are caught along with their parents.

After the president instituted a zero-tolerance policy that all illegal immigrants should be referred for criminal prosecution, administration officials argued that the Flores decree legally prevented them from keeping adults and children in custody together for more than two weeks. Amid fierce criticism, Trump signed an executive order this summer barring family separations at the border, although it remains subject to legal challenges.

WATCH: HUNDREDS OF MIGRANTS ATTEMPT TO STORM PORT OF ENTRY IN SAN YSIDRO

The president clarified that “they feel an advantage when they’re with a young child. … They call ’em grabbers, that’s a term I’ve heard. … They grab a child, because when they have a child, they feel a lot safer. … When you know there’s going to be potential violence, you know there’s going to be tear gas or something — you don’t take your child and bring them there. I can say that all over the border, you have a lot of grabbers, you have a lot of people who grab children, and they have no idea who these children are. They’re not parents. They have no idea. And frankly to release the children to these people is a disaster.”

“They grab a child, because when they have a child, they feel a lot safer.”

At the White House earlier in the day, Trump similarly defended the Border Patrol authorities who fired the tear gas.

“They had to use it; they were being rushed by some very tough people,” Trump said. “And so they used tear gas. Here’s the bottom line: No one’s coming into our country unless they come in legally.”

The situation Sunday was not unprecedented. In 2013, during the Obama administration, Border Patrol agents used pepper spray to fend off a crowd of approximately 100 migrants who attempted to rush the San Ysidro port of entry. The migrants in that episode also reportedly threw rocks and bottles at U.S. authorities.

Other analysts suggested that a rework of the immigration system might be necessary to dissuade similar efforts by members of any future migrant caravans without encouraging clandestine migration. John Cerone, a visiting professor of international law at The Fletcher School at Tufts University, told Fox News that he would recommend “the creation of new visa categories that people can apply for without having to physically come to the U.S. first.”

At the roundtable, Trump said the episode at the border Sunday highlighted the importance of building a robust border wall.

“The only little breach yesterday, we took care of it very nicely and quickly and apprehended those who breached, was in one area where the wall wasn’t quite built yet — it wasn’t completed,” Trump said. “When people look at what’s going on at the border, they agree … with what we’re doing, very strongly.”

The president said he would have no reservations about closing the entire southern border, saying any implications on trade only would encourage Mexico to get a handle on the migrant situation there. Trump also noted specifically that some Mexican police officials had been harmed.

“I’ll close it for a long time,” Trump said. “And as far as trade, I’m not concerned, because Mexico has done very well with trade with the United States.”

He added: “I suspect because of how well the country’s doing, we have a lot more people [coming]. This isn’t happening by luck. Something’s happening in Honduras, and Guatemala and El Salvador — you look how organized it is. They’re handing out papers.”

The primary purpose of the roundtable was to discuss the so-called First Step Act, the first major rewrite of the nation’s criminal justice sentencing laws in a generation, which would boost rehabilitation efforts for federal prisoners and give judges more discretion when sentencing nonviolent offenders, particularly for drug offenses. In particular, the proposed bill lowers the mandatory minimum sentence for non-violent repeat drug offenders from 25 to 20 years, reduces mandatory minimums for other crimes from 20 to 15 years, and makes no distinction between powder cocaine and crack cocaine.

Trump highlighted recent criminal justice reform efforts in Texas, Kentucky, and Georgia, and said “a lot of people have changed their minds” on the topic.

“If you look at some of the people who are most supportive of this,” Trump said, “it’s very impressive. People that are really into the world of strength and law and order, and they’re totally supporitve of this, as much as anybody.”

The roundtable took place just an hour before Trump’s second campaign rally of the day in Mississippi to support incumbent GOP Sen. Cindy Hyde-Smith, who is facing off in Tuesday’s special election runoff against Democrat Mike Espy.