Latest News
Home /Steve Doocy: Can God be in gravy? Let me tell you what happened with my mom

I don’t know about you but we don’t eat much gravy these days unless it’s a holiday, like Thanksgiving. For me, the gold standard when it came to gravy was my mom’s. So delicious and unique, it always tasted like home.

For the longest time I tried but couldn’t replicate her recipe, she never measured which I think was probably the way she learned from her mom, who in the 1950’s and 60’s, was a short-order cook at Frank and Em’s out on the highway north of Algona, Iowa.

Whenever I wanted to make mashed potatoes and gravy for that taste of home, I would call my mom in Kansas and she would walk me through how she did it. I probably called her 50 times and by about the 51st time I’d figured out how to make a good gravy, so maybe I was using it as an excuse to call and show her that even though I was 40 years old, a son will always need his mother.

My mom died on Christmas morning 1997. It was sudden and completely unexpected. 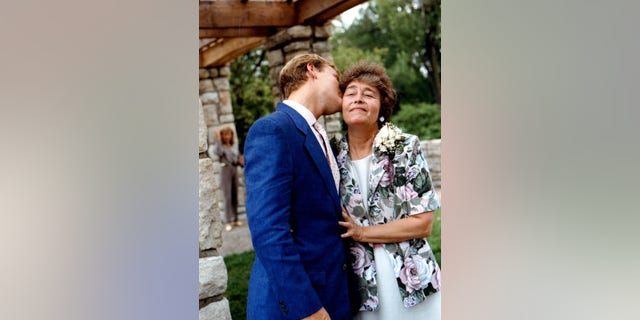 Two weeks after the funeral, I was back in New Jersey. It was a Sunday morning and I was the lector for the 10 a.m. mass. They asked me if I wanted a substitute, given what had happened but I said no, I wanted to do it. In between readings, probably still in shock, standing in church, it was impossible not to think about my mother and wonder about Heaven and all of those things we hope really do exist. Listening to the choir on the opposite side of the church, I started looking in their direction and noticed in front of the altar an elaborate array of beautiful flowers and gifts and foods still on display from Christmas.

It took a moment to register but the closest bouquet to me was a huge spray of daisies. I’d never seen daisies in my church but there they were, just like the daisies my Mom held as she walked down the aisle of another church the day she married my dad.

Was that a sign? Maybe daisies are used a lot in churches and I just never noticed, I said to myself as I eyed the rest of the display. But then I stopped and stared at something you never see in the front of any church.

Amid the other holiday foods, a single bright red packet of McCormick gravy mix.

My mom’s favorite flowers and a gravy packet.

Maybe the daisies were a sign, and the gravy was another, in case I didn’t believe the first one.

It’s hard to explain the feeling that washed over me. After a really lousy Christmas, maybe it was a sign from God or Mom that there was a Heaven and she was up there keeping an eye on me. Or maybe it was simply a coincidence, although as Albert Einstein said, “Coincidence is God’s way of remaining anonymous.”

When my wife Kathy and I wrote “The Happy Cookbook” we did not include a gravy recipe. It’s not that Mom took the recipe with her; I know exactly how to make it…

Remove the meat from the pan and leave a few drippings. Over low heat stir in a slurry of 2 tablespoons of cornstarch mixed with 1 or 2 cups of broth. Whisk while it cooks. Salt, pepper, serve.

I have not made that in 20 years but please try it, it’s delicious.

My mom’s gravy? As I tap on my chest, above my heart, just know, it’s right in there.