Archaeologists in the ancient city of Pompeii have uncovered a remarkable fresco depicting a sensual scene involving the Roman god Jupiter and Leda, a legendary queen of Sparta from Greek mythology.

The fresco was discovered in a cubiculum, or bedroom, in the remains of the Roman city.

In the fresco, Jupiter is disguised as a swan. The figure of Leda being impregnated by the god in swan form was a fairly common home decoration theme in Pompeii and Herculaneum, another town destroyed in A.D. 79 by the volcanic eruption of Mount Vesuvius near present-day Naples.

Following the eruption of Mount Vesuvius, Pompeii was quickly buried by volcanic ash, killing about 2,000 of the city’s residents, according to History.com.

Leda is an important figure in Greek mythology. “The scene – full of sensuality – depicts the union of Jupiter, transformed into a swan, and Leda, wife of King Tyndareus,” explains the Pompeii archaeological site, in a Facebook post.

“From her embraces, first with Jupiter and then Tyndareus, would be born the twins Castor and Pollux from an egg (the Dioscuri), Helen – the future wife of King Menelaus of Sparta and cause of the Trojan War – and Clytemnestra, later bride (and assassin) of King Agamemnon of Argos and brother to Menelaus.”

In Greek mythology, Leda’s children were fathered by the god Zeus, the Greek version of Jupiter.

Pompeii archaeological park director Massimo Osanna praised this fresco as exceptional, since it was painted to make it appear Leda was looking at whoever saw the fresco upon entering the bedroom. 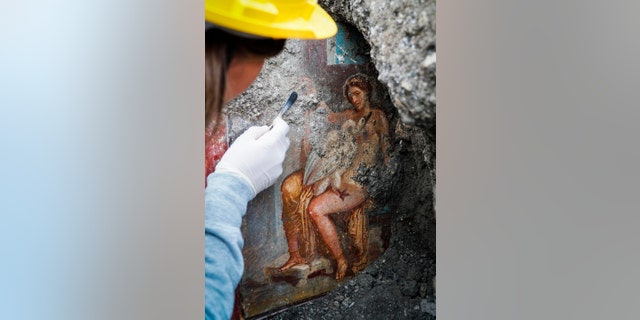 An archeologist cleans up the fresco ”Leda e il cigno” (Leda and the swan). (Cesare Abbate/ANSA via AP)

The fresco’s details include a depiction of Leda protecting the swan with her cloak as the bird sits on her lap.

Osanna noted the fresco’s context of the Greek “myth of love, with an explicit sensuality in a bedroom where, obviously beside sleep, there could be other activities.”

The fresco, with its colors still remarkably vivid, was discovered Friday during ongoing work to consolidate the ancient city’s structures after rains and wear-and-tear in past years caused some ruins to collapse, the tourist site’s officials said.

The site of the ancient city remained untouched for over 1,500 years until its rediscovery in the 18th century. During the 19th century, archaeologists used plaster to take casts from the vacuums that surrounded skeletons found in the compacted layer of ash. Left behind by the decay of organic remains, the vacuums offer an eerie snapshot of the victims’ final moments. National Geographic notes the plaster casts’ lifelike poses show some victims, for example, crawling, or seated with head in hands.

The fresco is just the latest fascinating find at Pompeii. A scrawled piece of text on a wall in Pompeii, for example, is rewriting the history of the famous ancient eruption. The newly discovered charcoal inscription suggests that the eruption occurred in October of the year 79, two months later than previously thought.

In addition, archaeologists recently uncovered the undisturbed skeletons of a small group of people who took shelter from the devastating eruption of Mount Vesuvius. And earlier this year, images of a man’s skeleton, apparently crushed by a rock during the eruption, went viral after their discovery.

Archaeologists also recently unearthed the final resting place of an ancient racehorse among the ruins of Pompeii.

A new study recently revealed that when Mount Vesuvius erupted, the intense heat caused victims’ skulls to explode and their blood to boil.

Fox News’ Chris Ciaccia and The Associated Press contributed to this article.