After retired Admiral McRaven said Trump’s attacks on the media were ‘greatest threat to democracy,’ President Trump dismissed the retired 4-star admiral and his work on the raid that killed Usama bin Laden; Garrett Tenney reports.

The Republican National Committee on Monday backed comments by President Trump that were critical of retired Navy Admiral William McRaven, best known for overseeing the Navy SEAL operation that resulted in the death of Al Qaeda leader Usama bin Laden.

“He’s been critical of President @realDonaldTrump— even dating back to the 2016 campaign,” the tweet added. “He’s hardly a non-political figure.”

Trump referred to McRaven as a “Hillary Clinton fan” and an “Obama backer” during an exclusive interview with “Fox News Sunday.” He then segued into criticism of McRaven for not finding bin Laden sooner.

McRaven, who retired from the Navy in 2014 after 37 years of service, was the head of Joint Special Operations Command when bin Laden was killed in May 2011. McRaven has repeatedly criticized Trump over the president’s description of journalists as “the enemy of the American people,” writing in February 2017 that those comments represented “perhaps the greatest threat to democracy in my lifetime.” 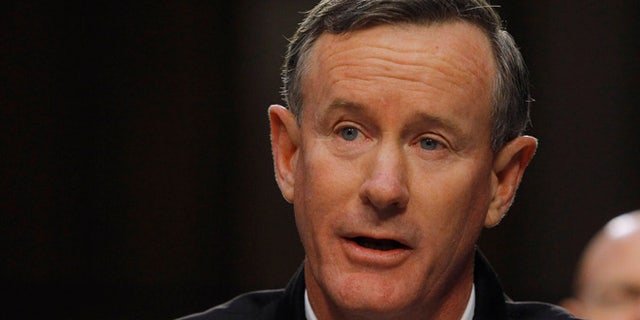 William McRaven retired from the Navy in 2014 after a 37-year career.
(Reuters)

In a statement to CNN on Sunday, McRaven stood by his criticism of the president.

“When you undermine the people’s right to a free press and freedom of speech and expression, then you threaten the Constitution and all for which it stands,” said McRaven, who also noted that he “did not back Hillary Clinton or anyone else” in the 2016 election.

“I am a fan of President Obama and President George W. Bush, both of whom I worked for. I admire all Presidents, regardless of their political party, who uphold the dignity of the office and who use that office to bring the Nation together in challenging times.”

Former CIA Deputy Director Michael Morell criticized Trump’s remarks about McRaven on Twitter Sunday, writing “Correction needed to [Trump’s] comment today that McRaven should have found bin Laden sooner. CIA did the ‘finding.’ McRaven’s special operators did the ‘getting.’ They moved within days of President Obama giving the order.”

Robert O’Neill, who fired the shot that killed bin Laden in 2011, wrote Sunday that McRaven “was born to lead this mission. I’ll follow him anywhere. If only people heard the real speech he gave the Team …” On Monday, O’Neill added: “The mission to get bin Laden was bipartisan. We all wanted to get him as soon as we could.”

Sen. Marco Rubio, R-Fla., who has his own fraught relationship with Trump, tweeted: “I don’t know if Adm. William McRaven shares my political views or not. But I do know that few Americans have sacrificed or risked more than he has to protect America & the freedoms we enjoy. His military career exemplified honor & excellence. I am grateful for his service.”

Texas Land Commissioner George P. Bush, the nephew of former President George W. Bush, wrote: “Having served in Afghanistan with Adm. McRaven, I have personally witnessed his patriotism & love of country. He is an American hero & has always served our country with honor. I’m grateful for his service and sacrifices for our freedom.”

McRaven also criticized Trump earlier this year when the president revoked former CIA Director John Brennan’s security clearance. In a letter published by The Washington Post, McRaven wrote that “I would consider it an honor if you would revoke my security clearance as well, so I can add my name to the list of men and women who have spoken up against your presidency.”

“Through your actions,” McRaven added, “you have embarrassed us in the eyes of our children, humiliated us on the world stage and, worst of all, divided us as a nation.”

Trump returned to the subject of the bin Laden raid in a tweet Monday morning but did not name McRaven specifically.

“Of course we should have captured Osama Bin Laden long before we did,” Trump said. “I pointed him out in my book just BEFORE the attack on the World Trade Center. President Clinton famously missed his shot. We paid Pakistan Billions of Dollars & they never told us he was living there. Fools!.”