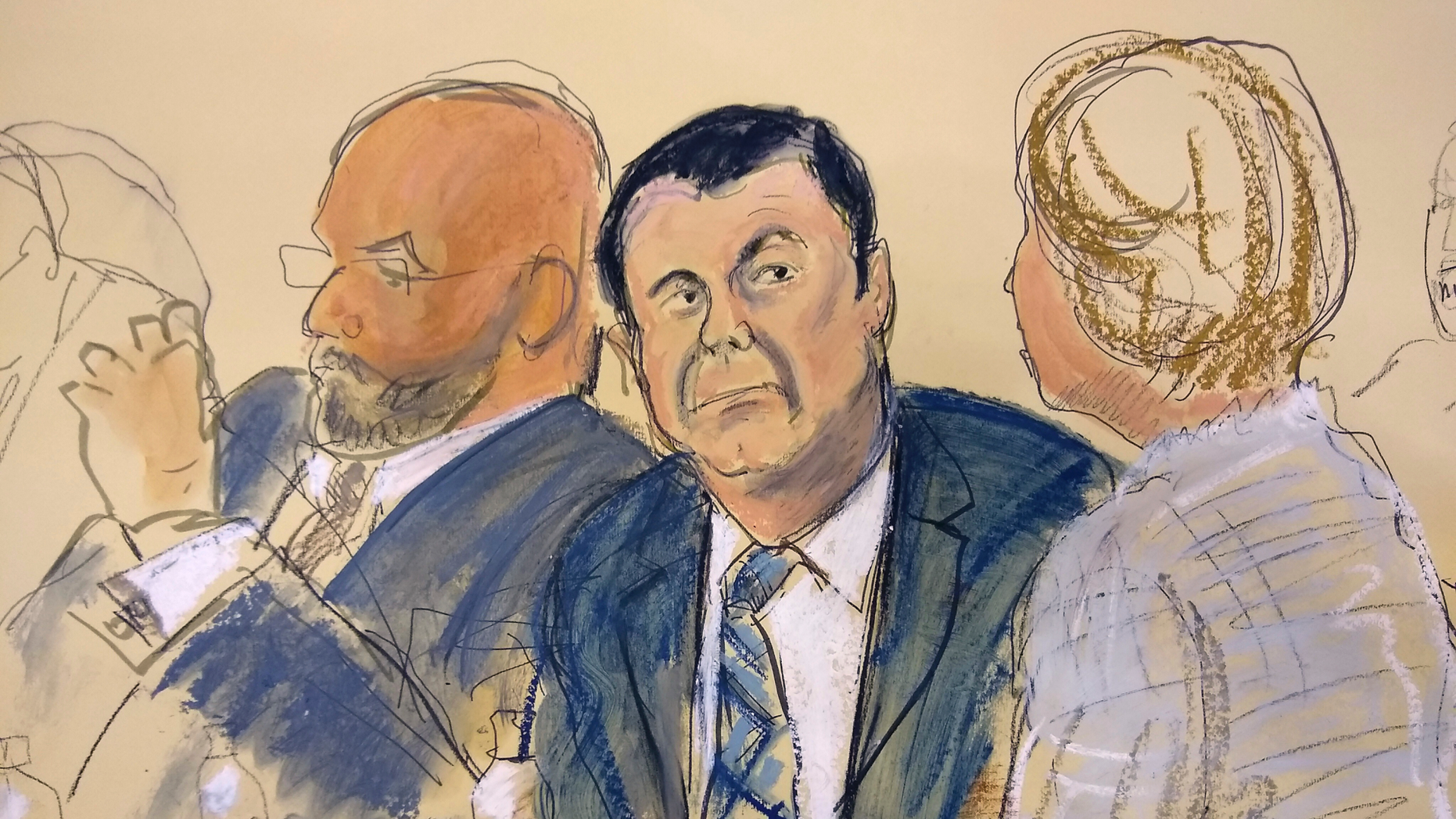 In this courtroom sketch Joaquin “El Chapo” Guzman, center, sits next to his defense attorney Eduardo Balazero, left, for opening statements as Guzman’s high-security trial gets underway in the Brooklyn borough of New York, Tuesday, Nov. 13, 2018. Guzman pleaded not guilty to charges that he amassed a multi-billion-dollar fortune smuggling tons of cocaine and other drugs in a vast supply chain that reached New York, New Jersey, Texas and elsewhere north of the border. The infamous Mexican drug lord has been held in solitary confinement since his extradition to the United States early last year. (Elizabeth Williams via AP)

During the third day of the highly anticipated kingpin trial in Brooklyn,– in which Guzmán faces life behind bars for a multitude of charges related to his apparent running of a brutal Mexican cartel – Jesus “El Rey” Zambada, brother of cartel co-chieftain Ismael “El Mayo” Zambada, shed light on the mammoth hush money effort employed to shield shipments coming from Colombia to Mexico, and then to the United States.

Zambada, a 57-year-old accountant, testified Thursday that he was a cartel member from 1987 through his capture in 2008, and oversaw operations in Mexico City. He said he was in charge of ensuring that bribes were taken care of,on behalf of El Chapo and Mayo – who remains at-large and is said to now be at the helm of Sinaloa.

Moreover, Zambada claimed to have personally paid large sums of money – upward of $300,000 monthly to officials – to recipients as high-ranking as Mexico’s attorney general’s office. He told the court he once paid $100,000 to Gen. Gilberto Toledano, in charge of the state of Guerrero at Guzmán’s request to ensure safe passage.

He further detailed that there were several others across in the country in different states and territories who were also in charge of controlling and paying bribes in their designated areas, and that such payments canvassed both federal and state levels in Mexico.

“It was to protect and secure the movements of the cartel and security for all of us too,” Zambada said.

MANIPULATION, FEAR, SNITCHES, AND A NEW CELL: BEHIND THE SCENES AS EL CHAPO GOES TO TRIAL

He later described Guzmán’s first prison break in 2001 and acknowledged that he played in a role – giving coordinates to the accused drug lord and driving him to meet his brother Mayo for the first time – and chronicled the bloody war between the Sinaloa and Tijuana cartel which ensued.

Zambada is just one of many key cartel members in U.S custody believed to have “flipped” on the man they once feared, befriended and allegedly worked under.

However, lawyers for Guzmán insist their client was merely a middle-man in the Sinaloa cartel who is now being used as a scapegoat by the “corrupt” Mexican government and the U.S. Drug Enforcement Administration, further insisting that testimonies such as Zambada’ s are not credible.

At times, Guzmán – donning a dark suit – crossed his arms as Zambada spoke.

But at the start of the day, sans shackles, Guzmán instead waved at his courtroom audience while his defense attorney Eduardo Balarezo jovially fixed his client’s tie.

The trial is expected to drag out for at least four months and offer key insights and intelligence into the scope of Mexico’s drug trafficking.